Groundwater Modeling with AEM – A Look Back, and a Look Ahead to the Future

Introduction
The analytic element method (AEM) approach to groundwater modeling is efficient, powerful, easy to implement, fast to run, and provides the analyst a means for gaining insight at various steps of the modeling process that can guide data collection and subsequent model development. It is also a method that is apparently underutilized by groundwater modelers today. (We say apparently because there is some hope that modelers employ the method more than they report it in their final project documentation.)

This article will briefly describe the AEM groundwater modeling approach and how it evolved to its present state.

Definition of AEM groundwater modeling method
The Analytic Element Method is often described as being based on (1) mathematical solutions for the groundwater flow equation written in terms of discharge potential, and (2) the principle of superposition.

What that means in practical terms is that the flow equation is not written in terms of hydraulic head; it is written and solved in terms of discharge potential, which for a constant thickness aquifer is essentially head multiplied by hydraulic conductivity and aquifer thickness (Brikowski 2013). This allows the AEM, by superposition (adding of individual solutions), to be applicable to both confined and unconfined flow conditions as well as to aquifers that include heterogeneities (Strack and Haitjema 1981).

A mathematical solution, in terms of strength coefficients, is generated for the space around each element in the model; with each element representing a hydraulic or hydrologic feature - - a well, infiltration basin, or river reach for example. Then all of the element solutions are added at each point in model space to develop a 2D or 3D picture of the discharge potential field, and hydraulic head field. That field can be contoured to produce a head distribution map, or used as a basis for pathline tracing, or processed to calculate the groundwater flux though a boundary or user-defined transect.

The AEM is newer than FD and FE
Several authors have pointed out that the AEM is newer than finite-difference (FD) and finite-element (FE) methods. While that is technically true - - FD methods late 1960s; FE methods early 1970s; AEM about 10 years later in the late 1970s / early 1980s - - AEM is hardly the “new kid on the block.” It has been developed, applied and tested for almost 40 years now. And AEM was originally developed to address the limitations of prior FD and FE techniques. (To read the story of how AEM’s inventor Dr. Otto Strack first applied AEM on a large US Army Corps of Engineers project see Deming 2003. For more information on the history, applications, and strengths of AEM in general see Hunt 2006.)

While computer power has, in recent years, made up for some of the inefficiencies of FD and FE groundwater flow modeling methods, the continued development of AEM over the past four decades provide it with a number of advantages that still make it the method of choice in many situations. That development, and those advantages, are discussed in the following sections.

Brief history and progress in the field of AEM method of groundwater modeling
As mentioned above, the AEM groundwater modeling method that was originally developed in the Netherlands came to be first used in the United States by Dr. Otto Strack on a large-scale USACE dewatering project. Dr. Strack was assisted on the project by Henk Haitjema. Together these two PhD hydraulicians and mathematicians would go on to expand the capabilities of the method and make it available to groundwater modelers in the form of widely used AEM software packages. They also trained dozens of students (see figure below) who rose to prominence in the AEM field and developed their own methods and software. 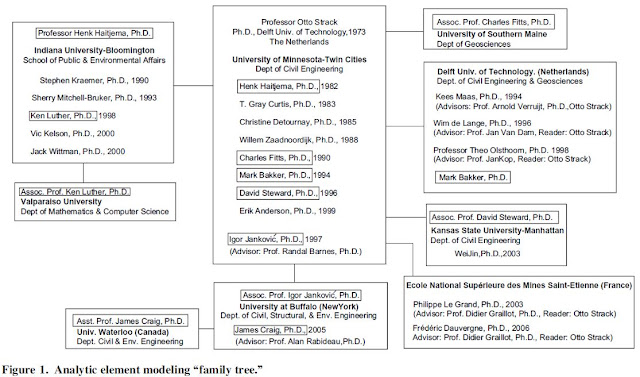 Some examples of the more popular and widely used AEM groundwater modeling software include:
(For more information see:  http://www.analyticelements.org/mw/index.php/AEM_Software  )

Advantages of AEM
The Analytic Element Method in general, and all of the AEM codes described above (and others not described here), allow the modeler to develop groundwater flow models with the following advantages:
The Future
Significant advancements in the field of AEM modeling of groundwater flow have been in progress over the past several years, and are likely to continue into the future. New, more flexible, elements are being developed (e.g. Ranjram and Craig 2018), and new solver methods are being implemented to address difficult modeling problems such as the instabilities that can occur when severely dewatering multilayer aquifer models (e.g. Fitts 2018). There are developments underway that will expand analytic element flow modeling into the area of contaminant fate and transport simulation (e.g. Majumder and Eldho 2019), and research into rapidly and efficiently solving large complex AEM models in the cloud (Fullerton 2017).

Conclusion
As Steve Kraemer (2007) noted, “There is a small but active community of ground water modelers who use an innovative solution technique known as the analytic element method.” That method has evolved over the years, and its use and publications describing its use continue to grow.

For the reasons outlined in this brief summary, AEM presents an ease of use, flexibility and power that make it ideally suited for a wide variety of groundwater modeling applications; and the perfect tool for Stepwise Modeling. For more on that subject see the National Groundwater Association White Paper on Groundwater Modeling (https://www.ngwa.org/publications-and-news/industry-resource-library/White-papers -  free to NGWA members). In addition, we are planning an article on AEM and Stepwise Modeling in an upcoming flexAEM blog post.

flexAEM
At McLane Environmental, we have been using a variety of AEM groundwater modeling tools since the early 1990s, and have applied them successfully in dozens of hydrogeologic investigations. To hopefully foster the wider use of AEM techniques in the modeling community, we have published a series of AEM modeling exercises, and model development software tools, centered around AnAqSim modeling software.

These exercises demonstrate the usefulness and accuracy of results generated by AEM models. While focused on AnAqSim, the concepts and tools are applicable to other AEM software and to groundwater modeling in general. For more information please visit the flexAEM website (http://www.flexaem.com/).

Posted by flexAEM at 1:58 PM No comments:

Since the late 1980s, the development and use of a Conceptual Site Model (CSM) has been described in regulatory guidance and the technical literature as a sound platform for developing a qualitative (narrative and pictorial) description of contamination sources and groundwater flow conditions at a contaminated site. CSMs have typically been used for identifying data needs; for performing very preliminary receptor identification; and for providing a qualitative basis for decision making regarding site cleanup planning and implementation.

Linkage between the CSM and quantitative analysis of key aquifer and contaminant processes, however, is typically either not discussed, or mentioned briefly in the context of risk assessment.  To remedy this issue,  the development and use of a Quantitative Conceptual Site Model (QCSM) is warranted, as it provides a functional tool for project leaders to support data collection, conceptual model testing, receptor impact analysis, and remedy evaluation, selection and design.

What is a QCSM?  Whereas a traditional CSM is typically defined as a written and/or illustrative representation of the various processes that control the transport, migration, and potential impacts to receptors via soil, air, groundwater, surface water, and/or sediments (and is typically qualitative in nature), a QCSM consists of merging quantitative analysis results with the framework of a sound conceptual site model to form a proper basis for high level decision making.  Although there are many quantitative tools that can be utilized to facilitate QCSM development, groundwater models, and AEM models in particular, provide a fast, efficient tool that can be utilized to better understand site conditions, guide site investigations, and evaluate remedial options.

When describing CSM development, regulatory and technical guidance is typically vague with regard to the application of computer models, and if and when it is discussed, modeling typically appears to be an ancillary, not integral process.  In contrast, the QCSM approach integrates modeling into the decision-making process, explicitly calling for the use of groundwater (and soil zone) flow and transport models to develop a quantitative representation of the flow system, and provide answers to problems that are primarily hydraulic in nature ( e.g. capture zone, mounding, etc.) and/or related to the transport of contaminants (e.g., evaluation of potential receptors, monitored natural attenuation evaluations, etc.). 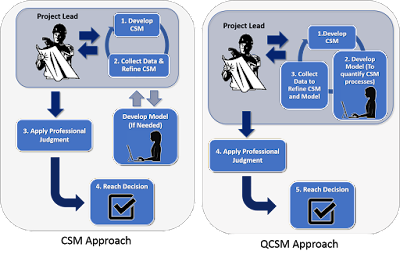 As an example of developing and applying a QCSM, the approach was effectively utilized at an industrial site in New Jersey, where it was important to understand how both regional pumping influences and site-specific features may affect groundwater flow conditions at the local scale, which in turn was important to investigate the nature and extent of groundwater at the site. Accordingly, a groundwater flow model was developed using AnAqSim, which allowed for the computationally efficient incorporation of large-area regional flow features (which have an effect on flow patterns at the site-scale), while still allowing for detailed analysis of flow conditions at the local scale.  The AnAqSim model was constructed in the early phases of investigations at the site, and once calibrated to site conditions, was integrated into the decision-making process.  Specifically, the model was used by the project team to better understand: 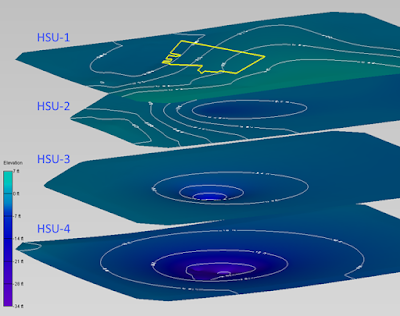 Once this quantitative information was conveyed, it facilitated a discussion between the analysis team and the field investigation Project Manager that led to quickly identifying data and information gaps, and effectively planning additional investigation activities to address those data gaps.  Information collected from additional investigation activities (e.g., groundwater and surface water elevations) was incorporated back into the model, which allowed for an improved model calibration, and a higher degree of confidence not only in the model, but for the QCSM of the site and surrounding area.

As this example illustrates, a QCSM can be integrated and utilized at every stage of the project, and provides a strong clear basis for higher level decision making in a manner that is scientifically supported and transparent.