Public water supply wellfields provide water for a variety of beneficial uses in homes, businesses and industries, and for farmland irrigation in many communities. To protect those water supplies, water purveyors often perform analyses to determine the area over which water enters and flows though the aquifer supplying a well or wellfield, so that measures can be taken to prevent and/or minimize the potential contamination of groundwater in those areas.
Often referred to as “wellhead protection areas”, a number of state and local governments have regulations and guidelines on how to delineate these groundwater protection areas.  For instance, in the Commonwealth of Massachusetts, regulations require that the groundwater protection area for a well (referred to as a “Zone II Area”) be delineated under severe hydrologic conditions.  Specifically, Massachusetts regulations describe the Zone II Area as follows:

“Zone II is that area of an aquifer which contributes water to a well under the most severe pumping conditions that can be realistically anticipated (180 days of pumping at safe yield with no recharge from precipitation). “
https://www.mass.gov/how-to/ws-07-zone-2-pumping-test

Typically, one of the most common methods utilized to delineate Zone II Areas (and groundwater protection areas in general) is a groundwater flow model.  AnAqSim is particularly well-suited for this type of analysis because it has a number of special features and tools that make it easy to delineate pumping well Zones of Contribution in general, and Zone II Areas in particular, including the following:
As the first installment of our new AnAqSim Example Application Series, which was developed to provide a set of practical modeling application examples that demonstrate how common groundwater modeling analyses can be accomplished using AnAqSim, our Simple Zone II Example Application  demonstrates how AnAqSim can be used to delineate a Zone II groundwater protection area consistent with Massachusetts 310 CMR 22 and guidance documents. 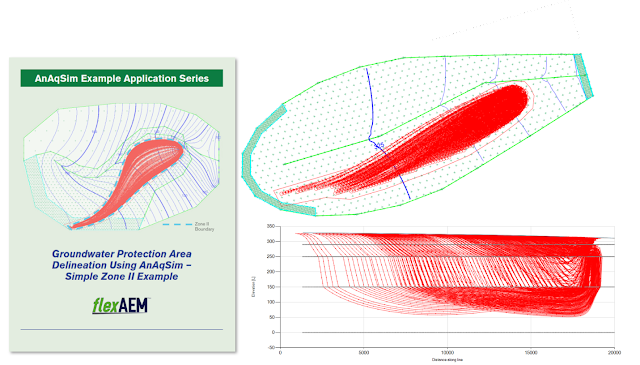 Although the example is focused on the delineation of a Zone II area in Massachusetts, the techniques used in delineating the Zone of Contribution (ZOC) and Area Contributing Recharge (ACR) for the well can also be applied for delineating groundwater protection zones under other regulatory programs.

The example, which comes with a detailed guide on model set up and Zone II delineation with AnAqSim(and all associated modeling files), can be downloaded for free HERE.

Posted by flexAEM at 5:51 PM No comments: